Check out pictures from recent events and performances in my new photo gallery.

Any questions?  Do you want him to appear at your next event?  Please call him at 763-350-7458 or email him at Arnoldlookalike@yahoo.com

Stay in touch with him on Facebook.  Find him at "Lorvin The Terminator." 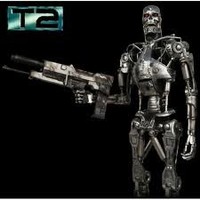 This is Lorvin's website.  He started doing Arnold as The Terminator in 1996.  He has had local and national celebrity look-alike agents that have lined up the work.  Over the years, he has appeared at Planet Hollywood, Make A Wish fundraiser, Great Clips National Convention, Harley Davidson Museum, National Celebrity Look-Alike Conventions in Palm Springs and Las Vegas, events on Hollywood Blvd. in Los Angeles, San Francisco, and Washington D.C. and many trade shows, parties, fund raisers, and a variety of events.   He's appeared on television different times for the MDA telethon and the Minnesota State Fair Celebrity Look-Alike Contest.  He has gotten two top three finishes competing against various impersonators from Elton John, Elvis, etc.  He is very muscular at 6'1" and 210 lbs.  Arnold was 6'2" and 210 when he filmed the movie Terminator 2:  Judgment Day.  That is the character he has done over the years.  He is  also a certified personal fitness trainer.  He got certified in 1996.  This job has encouraged him to keep physical fit over the years.